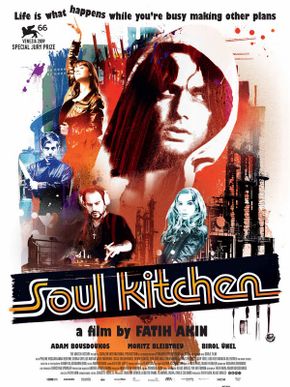 VOSTFR
SD
Rent 48h
2,99 €
This film can not be watched on mobile and tablet.
However you can rent or buy and watch it on a computer.
Cast
Adam Bousdoukos • Moritz Bleibtreu • Birol Ünel • Dorka Gryllus • Anna Bederke • Pheline Roggan • Lukas Gregorowicz • Wotan Wilke Möhring
Share
Zinos, a German of Greek descent, owns Soul Kitchen, a shabby, run-down restaurant providing working-class food in the Hamburg area, in an old warehouse space. The business is struggling financially, and tax inspectors ask Zinos for payments. Zinos unknowingly disturbs the peace in his locals-only restaurant by hiring a more talented chef.
Pics 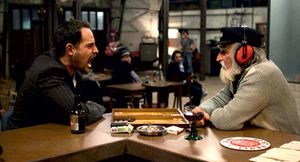 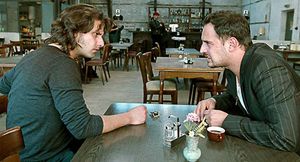 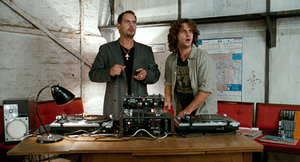 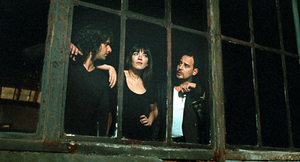 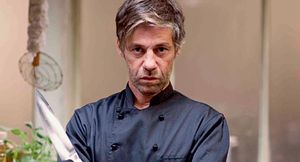 Slice and Dice "Food movies are an acquired taste. I have lost count of all the lip-smackers, the heart-warmers, and the spicy-noodle-slurpe...

"Food movies are an acquired taste. I have lost count of all the lip-smackers, the heart-warmers, and the spicy-noodle-slurpers, not to mention such molar-wrecking fables as “Chocolat” and “Like Water for Chocolate.” Few of them endure in the digesting mind longer than a two-course lunch. There are more satisfying examples, like “Babette’s Feast” and “Big Night,” which, though stuffed with delectable detail, are about something more than eating; the heroine of the first movie, for instance, is primarily repaying a debt of honor, not just entombing quails in pastry. Even those fine films, however, proceed on the assumption that food is the most binding of social glues, softening enmities and taking the edge off distress; whereas, in reality, we have all sat at dinner tables and felt our hopes subside, not rise, with every awkward course. The human heart, being no more dependable than a cheese soufflé, can go either way.

It’s no surprise, then, that the German-Turkish director Fatih Akin, a cheerful fatalist, should have chosen to dish up “Soul Kitchen” for his latest work. In “Head-On” and “The Edge of Heaven”—two of the most draining films, from anywhere, in the last ten years—he showed us lives that could, like recipes, curdle and go wrong at any moment. There was also a supper, near the end of the second movie, which felt like a resuscitation, as a grieving mother gazed about her, in an Istanbul restaurant, and remembered what it was to be hungry for life. “Soul Kitchen” is lighter fare, and the meal for two with which it concludes is meant to charm, not overwhelm, but the preceding palaver could have come only from Akin. Who else would stage a rapprochement between lovers in which one of them talks tenderly, with regret, while the other, spurning cutlery, chows down on chicken and fries?

Zinos Kazantsakis (Adam Bousdoukos) owns a crummy restaurant in Hamburg, serving fish sticks and meatballs to a bunch of locals. His brother Illias (Moritz Bleibtreu), described as “the king of thieves,” is in jail, but he comes out on regular day release and asks Zinos for a job—or enough of a job to let him make mischief elsewhere. Other figures are stirred into the mix: Zinos’s girlfriend Nadine (Pheline Roggan), who leaves to work in Shanghai; a graceful physiotherapist (Dorka Gryllus), who treats Zinos for a wrenched back and advises him, in tune with the movie’s mood, that “dancing will ease the pain”; and an old school friend, Thomas (Wotan Wilke Möhring), now a property developer, who wants to buy Zinos’s building—property development, even for sophisticated directors, being the accepted movie shorthand for villainy. Last, we have Shayn, the chef, played by Birol Ünel—no less scene-commanding than he was as the battered hero of “Head-On.” There is a great, tradition-slaying sequence here when he slits open a few fish sticks, whips up a sludge of ketchup and mayonnaise from plastic bottles, carves a cherry tomato into a rose, lays them all fancily on a plate, says “Forty-five euros” to a bemused Zinos, then tips them into the trash. Eat that, Babette.

You could argue that “Soul Kitchen” abets, rather than bemoans, this gentrification of a beloved town. The solid Hamburgers (and, indeed, their solid hamburgers) are chased away by Zinos and Shayn, who push the restaurant upmarket, serving hip concoctions to a funk-loving bourgeoisie; the story line, in short, mirrors the skyline that we glimpse from the vantage of a roof, with Teutonic gables interrupted by a forest of new cranes. The movie never strays from Hamburg, Akin’s place of birth, and I missed the tension in his earlier films, which forcibly tugged their heroes—some of them German Turks, like him—back and forth between the comforting lure of the West and the call of the Muslim East. They were Europeans, but not contented ones, and people like Zinos and his brother, despite the craziness that befalls them, seem both settled and sketchy by comparison. (There could be a simpler reason for this: they are Greeks, and it would be a miracle if Akin had got under their skin. Given the depth of hostility between the two nations, it’s a miracle that he even tried.)

Not to warm to this movie would be churlish, and foodies will drool on demand; I recommend the shoal of silvery fish, spitting in a wide pan and awaiting its rain of lemon. Akin addicts, on the other hand, will emerge undernournished, granted only fitfully the shots of scruffy yearning that we crave: Zinos, say, staggering from a bar at dawn, onto a gray road, with a fellow-drinker propped against him, or holding sad, horny conversations on a video linkup with his distant girlfriend. “I have to end this now,” she says, and all of us, including Zinos, immediately think, Does she mean the relationship, or the call? Fatih Akin may have lightened, more than deepened, his reputation, but one thing’s for certain: he is the first filmmaker to delve into the poetry of Skype."